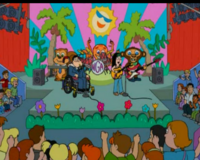 Haley and Papa Wheelie on stage 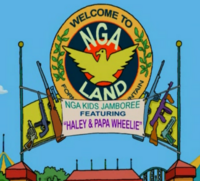 The band, which appeared at the National Gun Association (NGA)'s NGA Land amusement park, consisted of Hayley Smith on guitar and vocals, Stan Smith on vocals, and three guys in animal suits on keys, drums, and bass. The band's songs included "Susie Shot a Unicorn," "Ammo Blammo," and "I Want a Gun for Christmas."

Oh, and yeah, we got the spelling right, at least according to the sign shown earlier in the episode. The fact that the character's name is spelled "Hayley" apparently wasn't mentioned to the NGA folks.