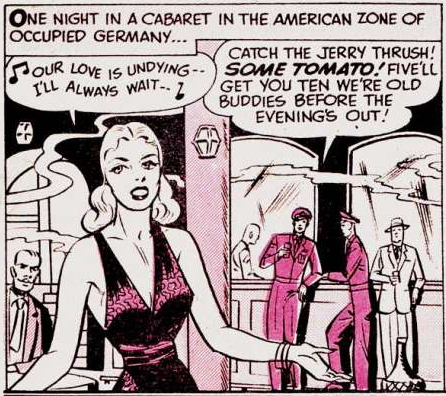 German cabaret singer in occupied Germany after WWII. Turns out Nazi rocket scientist Helmut Stefan is madly in love with her, so he sends a rocket ship to pick her up and bring her back to his base on the planet Mars where "He plans to conquer the world with the nucleus of the so-called German supermen he has brought to the planet." So, that's where they went! Meddling U.S. Army lieutenant Jock MacReady ruins everything for the would-be Fourth Reich.

From the "Out of this World" story of Fox Feature Syndicate comic book Rocket Ship X #1 (September 1951).