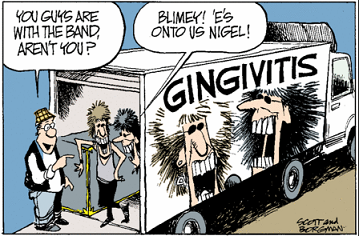 The band has shown up in posters in the background of the strip since 1997. In the heavily illustrated 2013 young adult novel spinoff, Zits: Chillax, Duncan and his best friend Hector get tickets to their concert.

They are a big influence on Jeremy's band, Goat Cheese Pizza.