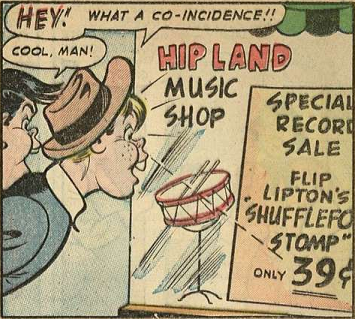 Probably swing musician from the "Disc Jockeying" story of Quality comic book Candy #49 (July 1954). When boyfriend Ted Dawson accidentally breaks Candy's record collection, he has the swell idea of having a record party, where everybody has to bring a gift of a record to the hostess. This would have been a great idea if this guy's single of "Shufflefoot Stomp" b/w "Lovers' Leap" hadn't been on sale at the Hipland Music Shop for only 39 cents.

The script of this story was reused in Tower Comics' Tippy's Friends Go-Go and Animal #2 (October 1966)!