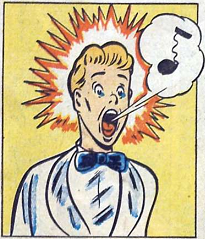 Regular backup feature character from Ace Magazines' teen-themed Scream Comics somehow shows up in their romance comic book All Love Romances #26 (May 1949) in "The Singing Rivals!" story. When Ernie's sister's friend discovers he sings beautifully in the shower, they enter him in the local amateur contest to compete with Randy Lewis. But Ernie doesn't want to, he's bashful. They talk him into it, but on the big night, he can't do it. They get him to try again, only this time, his sister Billie tricks him into practicing into a "dead mike" right before he goes on, and has the stagehand raise the curtain while Ernie has his back to the crowd. It works!