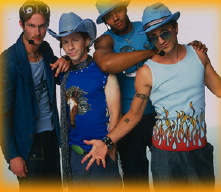 Parody number one boy band from the beginning of the 2001 film Josie and the Pussycats. They sing the songs "Backdoor Lover" and "DuJour Round the World" (both on the soundtrack album). When they learn THE HORRIFYING TRUTH that their music is being used to convey subliminal messages to teens, they are abandoned mid-flight. The boys manage to land the plane safely, only to narrowly escape death when it turns out that they have landed in the middle of a heavy metal festival; the metal fans attempt to tear them apart.

See also Josie and the Pussycats.