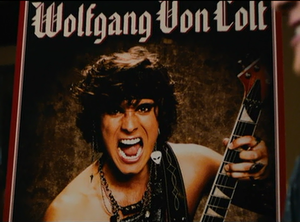 Aspiring rocker who struggles to break into the late 1980s LA hair metal scene in the stage musical Rock of Ages. The fact that there's a musical based around songs like Whitesnake ("Here I Go"), late-period Starship (yes, "We Built This City"), and Night Ranger ("Sister Christian," natch) is proof, if any was needed, that we are all now living in a story from The Onion. Anyway, he struggles, meets a girl, loses girl to big-deal rocker Stacee Jaxx sings some songs, is pressured to become a member of a boy band, wins back the girl, and then settles down with the girl in a house in Glendale. Glendale? Hmm. Didn't realize that this was a tragedy. 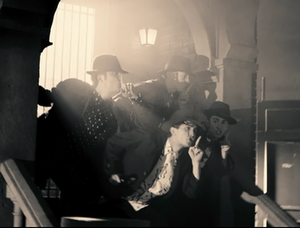 In the 2012 film, Drew's band Wolfgang von Colt gets a shot at the big time opening for big time band Arsenal's last show at L.A. rock club The Bourbon Room.

Signed by Stacee Jaxx's manager, no one wants to sign him as a rocker, so he gets a haircut, a new wardrobe and joins pop boy band The Z Guyeezz. 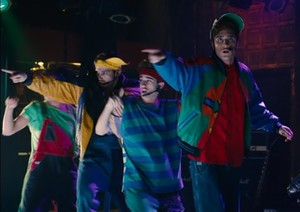