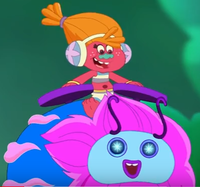 Talented, tiny troll DJ that first appeared in the 2016 animated kids' film Trolls. She also appeared regularly in the two spinoff television series Trolls: The Beat Goes On! and Trolls: TrollsTopia. She is usually shown wearing headphones and riding her wooferbug, which doubles as both transportation and a DJ turntable station. Somehow.

In the "DJ's Got Talent" episode of TTBGO!, Suki inspired fellow trolls Fuzzbert, Harper, and Dr. Moonbloom to also try their respective hands at DJing during the village's talent week show.

She is idolized by her niece, CJ Suki, who wants to be a DJ like her aunt.