In a very Monkees-like move, the TV band spawned a real world musical release: a 7-inch on famed indie label Drag City. Armisen played all the music and did the vocals for the record. 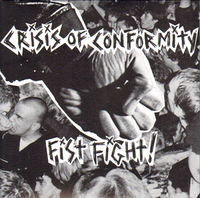