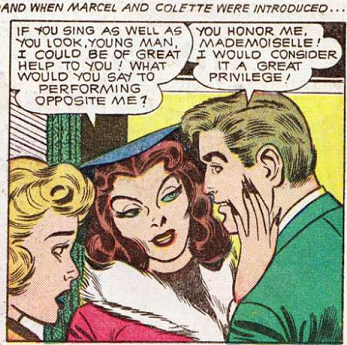 Pretty young French opera singer from "The Vampire of the Opera" story of horror comic book The Beyond #9 (March 1952). She sings at the Paris Opera House with her boyfriend Marcel, performing the opera Aida.

When Mademoiselle Pourette joins the company, she immediately has designs on Marcel, which is bad, since she's the vampire of the title. She tries to seduce him, and jealous of Colette's youth and beauty, changes into a bat, and sneaks into Colette's room each night to suck her blood, weakening her. She is sick for weeks before Madame Pourette decides to finish her off. It's up to old concierge Pepe to convince Marcel to defend his girlfriend, and stab Madame Pourette in the heart and defeat her.

Three months later, Colette has fully recovered and she and Marcel have married. Phew!

Colette's last name is not given.