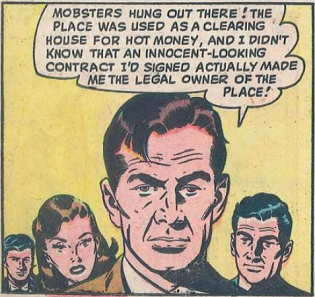 Trumpet player from the Swing Sisson story "Trumpet Call of Death," in Feature Comics #135 (June 1949). This mysterious, quiet stranger turns up regularly to listen to Swing Sisson's Clover Club gigs and after weeks, finally asks to jam with the band. He's good; even bandleader Sisson is impressed. But when he sees another stranger, Castle stops playing to attack the man who drops dead. Turns out he was Morgy, a criminal who ran a "gambling spot" where Castle led a band. Morgy tricked Castle into signing a paper that made Castle the club owner, so when the cops busted the place, Castle went to jail for five years. Now out, Castle sought Morgy for revenge, and heard he hung out at the Clover Club. Sisson figures out that Morgy's partner Keply actually killed Morgy by rabbit-punching him in the back of the neck during the struggle. Keply goes to jail, and Castle doesn't.

The other half of Castle's name is never given.