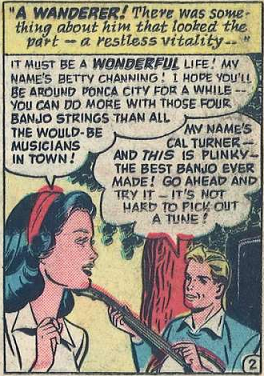 He's the title character in the "Wooed by a Wanderer" story from romance comic book Lovelorn #8 (October-November 1950). He comes to backwater berg Ponca City and woos local Betty Channing, who's fed up with the town. They hit it off while she's on the outs with her steady beau Roy. Also, Plinky- BWAH HA HA HA HA HA!

But when Channing finds out Turner's real job is running an old-timey medicine show, selling "Niripsa" (spell it backwards) from the back of his truck, she suddenly loses interest. Roy and Cal get in a fistfight, and Plinky gets smashed. Poor Plinky! (Chuckle snort) Roy sics the cops on Cal, but his medicine is just aspirin, so it's not illegal. Cal drives off and Betty picks back up with Roy.

A year later, Roy and Betty go to a dance where Jake Fletcher is playing, and Betty hears him play an old Ozarks tune from Cal, and learns Cal has an album out now, Banjo Solos by Cal Turner. But who could replace PLINKY!? *snort*

When Betty finds out Roy has cut down a whole grove of trees to sell for lumber, she thinks he's cold-hearted, and they fight. Right in the middle of the fight she hears Cal and runs off, but then a cyclone hits. The trees Roy cut protected Ponca City from storms, and the twister tears up the town, and Betty tears at the wreckage crying out for... Cal!

Betty, Cal, and Roy survive and the men pledge to help the town rebuild. Turner promises the proceeds from his sold-out concert tour. Cal and Betty reunite.