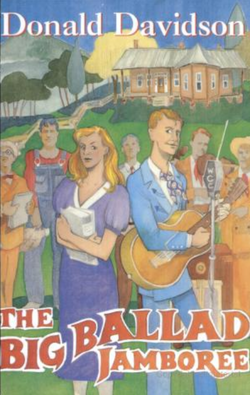 Singer and rascal from the novel The Big Ballad Jamboree by Donald Davidson (1893-1968). It was written in the 1950s, but not published until 1996. The novel is set in 1949, in the fictional Western North Carolina town of Carolina City.

But when she finally got around to Buck Kennedy, that was different. I was troubled in my mind, and I had a right to be. Now I won't deny that Buck Kennedy knows as many of the old songs as the next man, and maybe more, as Cissie claimed. And he sings ‘em in a rousing way, even if it is a sort of bull-bellowing bass. My worry was, I knew too much about Buck Kennedy. I remembered how he had been all roundabout the world too much, in too many kinds of rough places. His raising was none too good to start with, though his Ma was a church member and I know she died in the arms of Jesus. But Buck was just a gangling young sprout when she died; and when the old man married again, Buck soon fell out with his stepmother and his pappy, and he left home.