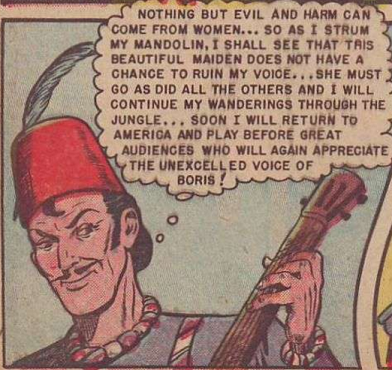 Popular and emotionally disturbed American opera singer from "The Minstrel Who Sang of Death!" story of comic book All Top Comics #17 (May 1949). He's obsessed with his fellow singer, Donna, who despises him. They quarrel , and she hits him in throat with a hairbrush. This ruins his voice, and he leaves the opera company to try to regain his voice. Somehow, this involves dressing up like a 17th century minstrel and wandering around the jungles of The Congo playing a mandolin. Did we mention he's emotionally disturbed?

"Jungle goddess" Rulah stumbles upon him, and saves him from a berserk bull elephant and takes him to a village. There, Boris kills a local woman named Lola, because, uh, emotionally disturbed, remember? He seems to do it magically by just singing at her.

Donna turns up again, tracking Boris down with a rifle because he's committed several murders back in the States. Boris kills her also, only it's slowly, so she has time to tell Rulah that Boris is a murderous psycho. We discover Boris kills by shooting poisoned needles launched from his mandolin strings like a bow and arrow. Boris tries to kill Rulah, but she punches him in his mandolin, causing the string to snap, wrap around Boris' neck, and strangle him to death.

Boris' last name is never given.