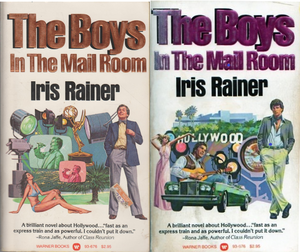 Sexy female singer from the 1980 show biz novel The Boys in the Mail Room by Iris Rainer. Her svengali husband Benny is a womanizing jerk.

Western Sound was booked solid. In the looping studio an advertising agency was working on a series of car commercials. In the largest studio, A, they were cutting the voice for an animated television special, and in studio B Beau Daniels was laying down the last three cuts on an album she'd started making a year ago, but which had been interrupted by the problems of her television show, and more recently by the problems of her dissolving marriage.

Beau, wearing a black sweater and jeans that were so tight even she, with her skeletonish body, had had to lie down in order to zip them up, sat on a stool in the studio with headphones on.