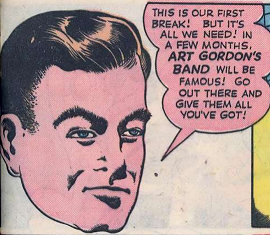 Rising swing band from "The Prisoner's Song" story of comic book Doll Man Quarterly #7 (Autumn 1943). They've just gotten their big break playing the Van Der Hoffen Ball, "the biggest social event of the season!" But bandleader Gordon catches gang leader Dirk Dalo and his two henchmen robbing the place. He tries to stop them, but is beat up and knocked out by Dalo. Dalo puts his fingerprints on a stolen cigarette case and uses it to blackmail Gordon. Dalo and his two gunsels used to play for the boy's club when they were young. So Dalo forces Gordon to add them to his band, so they can rob the events Gordon's band plays.

Eventually Gordon says he's going to the police, but when Dalo knocks him out again, superhero Doll Man intercedes, beating up the gang using no less than three-music/violence puns: "Here's where I 'beat the band'," "beat me daddy, eight to the bar," and "would you prefer a 'boogie-woogie' beat?"