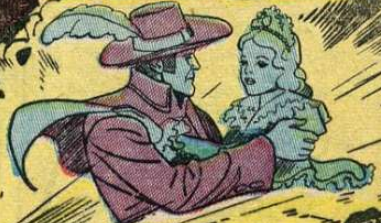 A century of midnights fall

While I seek my love in Craigside Hall

I'll walk the shadows in my pall

Till I find my love in Craigside Hall

She was the lover of Captain Bradwell. "Captain Bradwell was one of the earliest colonial rebels- a hundred years before the revolution! Craigside Hall became an arsenal- and legend says that Alicia fell deeply in love with George Hastings- a dashing privateer!" They perished when gunpowder stored under the mansion blew up. Their distant descendants help their ghosts reunite.

It's unclear if Bradwell had any sort of singing career before she was a ghost.