Dope-oriented comedians Cheech and Chong throw together this band in their 1978 comedy film Up In Smoke. They appear in a battle of the bands against real L.A. punkers The Dils, The Whores, and The Berlin Brats at real L.A. punk club The Roxy.

{{#ev:youtube|VJW67QN24SA}} In reality, C & C released the novelty song "Earache My Eye" by flamboyant "Alice Bowie" four years earlier on their Cheech and Chong's Wedding Album, where it hit #9 on the U.S. charts. Apparently, he also had a song called "I'm A Man," according to Bob Greene's 1974 account of his tour with the real Alice Cooper, Billion Dollar Baby. 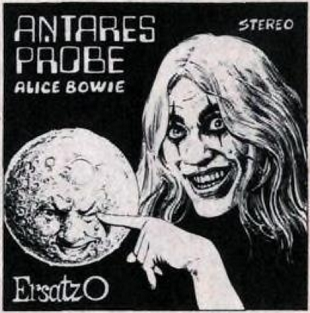 In the March 1974 issue of satire mag Crazy, writer Steve Gerber seems to have borrowed the Alice Bowie name for a record review in a Rolling Stone parody. His Alice Bowie has just released the album Antares Probe.