Difference between revisions of "Willie" 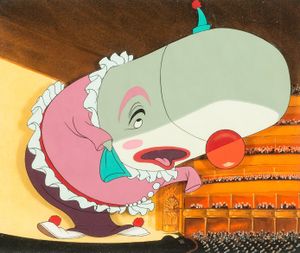 A sperm whale who wants to sing opera, and specifically, at the Met. From the 1946 Disney animated anthology film, Make Mine Music. He can sing in three voices at once!

His legend drives impresario Tetti-Tatti to sea to seek him out, convinced that Willie has merely swallowed real opera singers. Willie sings for Tetti-Tatti , thinking it's his big chance, but Willie is harpooned and killed, despite the efforts of the crew to stop Tetti-Tatti. Damn Disney, lighten up, will ya?

The audio was released as it's own album; The Whale Who Wanted to Sing at the Met.