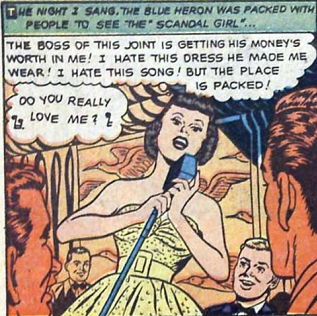 Singer from the "Scandal Girl" story of romance comic book Real Love #46 (April 1952). She used to be a San Francisco "private party girl, singing risque songs in shady places." She had to come home to Valleytown after a scandal. Fortunately, she used the fake name Honey Maye so it definitely can't follow her home and ruin her life. Apparently super-jealous Mrs. Garnet tried to shoot her and then jumped to her death when she found Marsh and her husband together. Marsh is innocent, she was hired to sing at a party, but there was no party, just Mr. Garnet.

She works at the local music store clerk when one day singer Dirk Adams walks in and needs her to be his accompanist on a gig. Later, he finds out she can sing, and they turn into a duo and sing in Manteca, Cloverdale, and Vallejo. They date, fall in love, and break up over her secret past after the scandal follows her home and ruins her life. But then they get back together and everything is perfect forever.