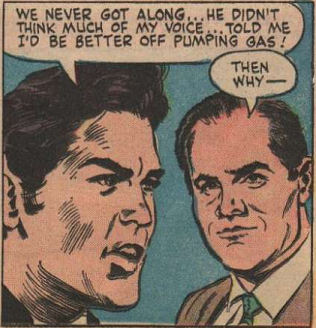 Handsome, successful club singer from the "Shadow at the Window" story of comic book The Detectives, (Four Color #1168, March-May 1961). The comic book was as a tie-in with ABC TV series The Detectives]. This client of "famed vocal coach" Arnold Warburton is investigated by the police for Warburton's murder. He's singing at a "small west side night club" called the Golden Rail.

He didn't get along with Warburton, who told him he was better off pumping gas, but he didn't kill him. Randall admits he's not that great a singer, but the chicks dig him, man. He has a touch of Elvis about him.