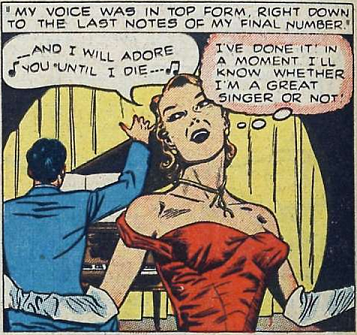 Opera-loving spoiled socialite in the "I Lied To My Heart" story of Our Publishing Co. comic book Love Diary #4 (January 1950). After losing a music scholarship to a some lousy poor kid who only NEEDS it, her parents foot the bill to train with demanding Professor Bertram Hammond. He won't take her because her voice is just pleasant, and only suited for popular music. This of course devastates her, and she schemes up a scam to find a less-demanding opera teacher and tell her parents she's training with Hammond. She finds Ramon Laverne, who assures her he can make her an opera singer. But after a spat with boyfriend Jerry Gibson, she sinks three grand of dad's money into a recital even though she's not ready. At the recital, she is devastated again, when she receives only polite applause, and not the thunderous kind she thought she so richly deserved. So she runs away and becomes a waitress.

She falls for jazz musician Jerry Gibson even though she hates jazz.