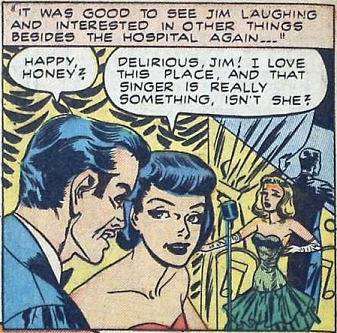 Nightclub singer and mystery to be solved in the "Miss 'X': The Girl Without a Past!" story of romance comic book Love Diary #4 (January 1950). She sings at the Rocambo Club when Dr. Jim Stanton and nurse Vicki Paige are out on the town. But then they witness her get hit by a truck and rush her to the hospital where Dr. Stanton operates on her.

Cunningham recovers, but has amnesia. When Dr. Stanton investigates, he finds she's only been singing at the club a week, and her room at the boarding house is almost barren. A consult with grumpy but wise Dr. Harris uncovers that she had amnesia before she got hit by the truck!

A private detective on her trail reveals that she's really Diana Daniels, the fiance of wealthy Stephen Harvey. She ran off after finding out his family was testing her to see if she was really just after his money. That emotional strain caused her amnesia. It doesn't explain how she became a singer for a week, cause there's no indication that she sang before.