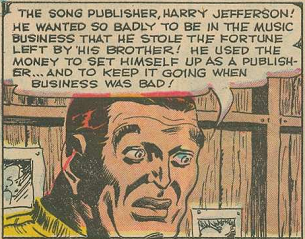 Beefy small-time trumpeter who's on the skids in the "Melody of Hate" story of Charlton comic book Strange Suspense Stories #27 (Oct 1955). Songwriter Neal Valentine stumbles onto a mystery leading to Riverboat, who's living in a shack under the Risdon Street Bridge.

Turns out Riverboat Davis' life is in danger from song publisher Harry Jefferson, the uncle of Neal's fiance. Davis and Boppy Gates knew Jefferson when he was a small-time honky-tonk operator. And they know the truth that Jefferson stole the fortune left by his brother to finance his music business. Jefferson's niece Jill was about to find out since her 21st birthday was coming up. Valentine saves Jill from Jefferson just in time, and Jefferson confesses and prepares for jail.