Difference between revisions of "Lorelei of the Snows" 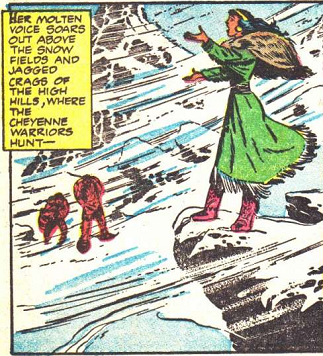 Unnamed native American singer from the "Lorelei of the Snows" story of comic book Straight Arrow #45 (May 1955).

She sings out in the wilderness of Cheyenne Indian territory and hunters who hear her are hypnotized into giving her all the furs they have trapped. Chief White Bull sends out Red Hawk to investigate. He discovers that sub-chief Flying Deer is using herb powders to drug the only waterhole in the area, which causes those who drink it to become easily lured and fall asleep. This lets Flying Deer get all the furs.