Difference between revisions of "Untitled" 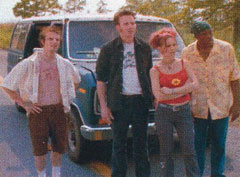 The mixed gender, interracial, guitar-drums-bass-vocals Chicago rock quartet whose van breaks down in the hick town of Hereabouts, Alabama and has to deal with the eccentric inhabitants.

From the 2000 indie movie Stalled, the brainchild of writer/producer Mindy Weinberg and based partially on her experiences in real band, 40th Day. The film won an award at the Telluride Indiefest film festival.