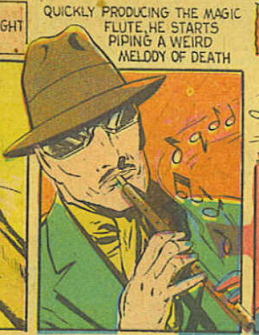 Mysterious superhero thanks to his magic flute. He appeared in only four issues of Holyoke Publishing comic book Cat-Man Comics as a back-up feature. Created and drawn by Allen Ulmer, Jr.

He's really lawyer Steve Prentice, who owns a collection of flutes and rare instruments he picked up touring the Orient. When he's framed and threatened with disbarment, he becomes the Pied Piper, using his magic flute to charm animals and people.

He doesn't have a costume, he just wears a hat, sunglasses, and a trench coat. But an in-house ad in Cat-Man Comics #8 (March 1942) shows him in a sort of medieval-style troubadour costume, so it seems like they had plans to continue his adventures (and give him a proper costume), but didn't.