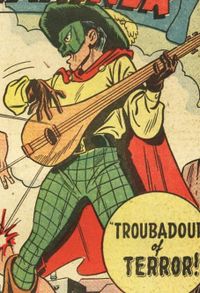 Shortly after co-writing the tune "Death in Venice" with the above musicians, Larnum was in a shipwreck and was presumed dead by his co-composers. They published the song in his memory, and it became popular. However, unbeknownst, Larnum survived on a deserted isle for some years before making it back to the mainland. Learning of the song's success, he assumed they all stole it from him, and vowed revenge.

And also vowed to dress up like a color-blind idiot in a bright yellow shirt, green plaid pants, a red cape, pirate boots, and a floppy hat with a big feather sticking out.

When Larnum comes to kill the Cleggets, they try to explain to him that he's murdered two people on a wacky misunderstanding, but he tries to murder them anyway.