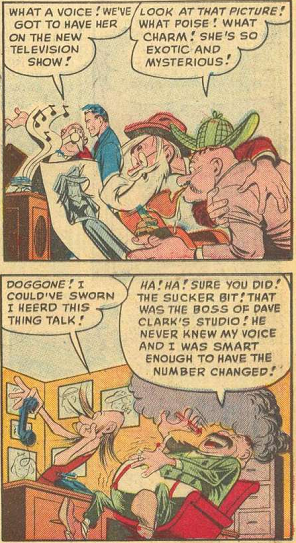 Singer who's really just a revenge scheme invented by a talent agent from the "Singing Swindle!" story of comic book Smash Comics #85 (October 1949).

When Graftly learns Dave Clark was involved (without figuring out he's Midnight), Graftly invents this singer to embarrass him and his station, WXBC.

He goes to the hills and picks up Esmereldy, the ugliest, dumbest, cartooniest hillbilly girl this side of Dogpatch. Then he floods the town with carefully crafted promo material about this sexy, mysterious, masked singer, complete with recordings by someone else. When Dave's boss buys it and puts her on the show sight unseen, Graftly is delighted. He'll have the mystery singer reveal herself as a dumb-as-dirt, bucktoothed hick on live TV as a fraud, embarrassing Clark and co.

But Graftly didn't count on Esmereldy's two feuding, gun-crazy, hillbilly suitors, Jeb Rukes and Lum Cornfield. They teamed up to get their Esmereldy back, and accidentally turn The Mystery Singer's debut into a screwball comedy hit.

She never even sings a note.