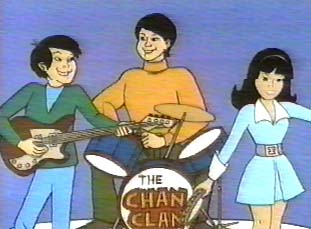 That Hanna-Barbera, always thinking- what if the Scooby Doo gang were also a band?! And had a magical van?! And ripped off an old movie character?! Thus, the 1972-74 animated Saturday morning show, The Amazing Chan and the Chan Clan. They solve some mysteries, play some music, and if that wasn't enough, their van could change form to look like any type of car or truck. Take that, Mystery Machine! The older kids had the band, and their pet, Chu-Chu, played tambourine. He was Simon to their Garfunkels, really.

Trivia time! Jodie Foster was the voice of Anne Chan! Poppa Charlie was voiced by Keye Luke, who used to play Number One Son in the old 40s Charlie Chan movies. And Ron Dante, who also sung for The Archies, provided lead vocals. This guy's got a site about 'em.

Ron Dante, who also ghosted for The Archies, did the vocals.