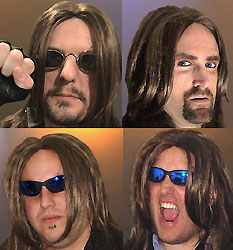 Formed in 1995 in Kings Nose, NJ, world-famous heavy metal band The No Talent Ass Clowns are known for their signature tune, Blow Chunks Ballet (http://www.youtube.com/watch?v=j8pPtYepzTE). Front man Lars Gunblade (upper left in photo) has caused controversy by tasing concertgoers from the stage (which has caused a number of alleged fatalities), getting hundreds of groupies pregnant carefully charted in a blog entry and talking about their infamous video interviews on YouTube.

Band members are rumored to dislike each other intensely but are keeping the band together because of the money and the seemingly endless procession of groupies with low self-esteem. They also are open about their hatred for their fans as well.

The band launched a touring blimp in 2010 in an attempt to outdo Led Zeppelin's touring airplane of the 1970s. Equipped with hot tubs and private bedrooms, the blimp made headlines when the band tried to race a naval blimp during the oil spill in the Gulf of Mexico. In 2011, the blimp exploded over Greenland and the band was thought to have been eaten by polar bears. Later, the band announced it was a stunt and that they had paid Greenland locals to be mauled by the polar bears. Another blimp was launched shortly afterwards and remains in use today. The band is rumored to be building a sub-orbital spacecraft for touring.

Singer Lars Gunblade maintains a long-standing feud with Foo Fighters front man, Dave Grohl after the two had a falling out in the 1990s. Grohl now refuses to even acknowledge that he knows Gunblade.

The No Talent Ass Clowns insist on releasing every album on Edison Cylinders, even though the format has been dead since 1915. Each album also appears on 8-Track tape. To date, no cylinders have been purchased and 8-Track tapes account for 0.0001% of sales. According to guitarist Vas Defrens, "We will never give up on these formats."

The [blog][1] on their web site chronicles their various sordid exploits and strange touring venues, including Consumption Auditorium (which still hasn't been condemned).

Since 1995, the band has been with No, Not There! Records. The label is owned by infamous Jerry Gold, who is also the Ass Clowns manager. Gold is often called upon to spring band members from jail. Remarkably, Lars Gunblade served no jail time after killing six concertgoers with a taser in 2011. Gold is rumored to have paid off more than two dozen police departments to keep the band out of jail and on tour.