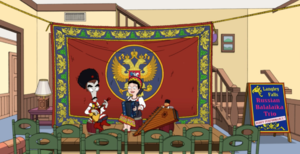 The trio prepares for their first show

A, uh, Russian Balalaika Trio from Langley Falls, Va. (Honestly, you probably should have been able to figure that one out yourself, people.) They are featured in the "Crotchwalkers" episode of animated sitcom American Dad! (first aired 13 Nov. 2013). The band consists of Roger the alien on balalaika, Hayley Smith on bayan, and Klaus Heisler, the talking fish, on gusli.

Not really fun but we took a screenshot of it anyway fact: Later in the episode their town name is misspelled as "Langeley." This wouldn't really be notable except for the fact that Hayley was already in a band that misspelled her name. 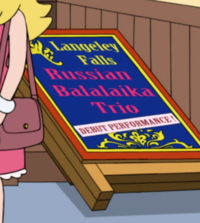