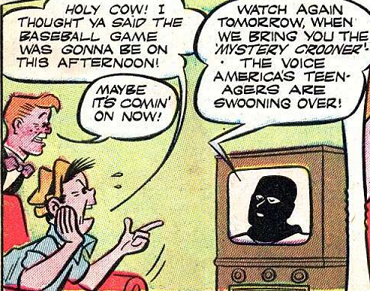 Masked television singer popular with teen girls in "The Chick Charmer" story of comic book The Kilroys #41 (May 1953). Regular character Jackson gets mad, the only reason he's popular is because he's on TV. He claims he could sing on TV and be a star. His pal Natch, takes him up on it, and forces him to go on an amateur talent show. Stricken by stage fright, he's terrible, but an overheard misunderstanding leads the local gals to think Jackson is the Mystery Crooner.

A station employee tells the other the secret that the Mystery Crooner is the son of old-time crooner Jack Brosby, which is probably a reference to Bing Crosby, and his singing son, Gary Crosby.