Difference between revisions of "Talagnu" 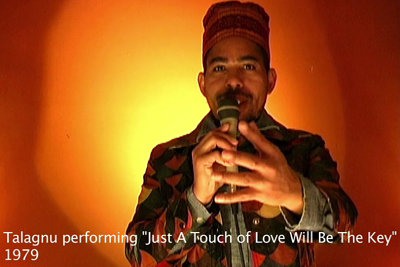 From the "Trail Blazers" (10 Apr. 2014) episode of sketch comedy television series Portlandia. Obscure, unknown singer from the late 1970s that Kendall Hughes (Fred Armisen) and Wendy Alexander (Carrie Brownstein) want to make a Kickstarter film about. Their film about wanting to make a film is nominated for a Can't Film Festival award, but doesn't win.

Talagnu (the "g" is silent) was "one of the biggest stars out of Daytona Beach in the 1970s" and was a big influence on other, obscure unknown acts: Willie Mitchell, The Lalula Sisters, Sam MacGunnigal and Dr. Melquor. Outtakes shown during the credits also mention Devon Stevens and Paula Pope.

Talagnu is briefly shown in 1979 singing "I Can See (Two Stars)" and "Just a Touch of Love Will Be The Key."