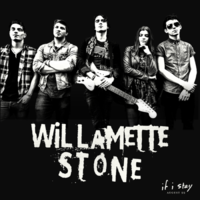 Press photo of the band
Band featured in Gayle Forman's 2009 young adult novel If I Stay and its 2011 sequel Where She Went. The band's guitarist/vocalist Adam Wilde is the boyfriend of novel's protagonist, Mia Hall. In the 2014 film adaptation, the band's name was changed to Willamette Stone.

But things had changed when Adam moved into the House of Rock and started college, though not for the reasons I'd thought they would. At the be­ginning of the fall, just as Adam was getting used to college life, things suddenly started heating up with Shooting Star. The band was offered a re­cord deal with a medium-size label based in Seattle and now were busy in the studio recording. They were also playing more shows, to larger and larger crowds, almost every weekend. Things were so hectic that Adam had dropped half his course load and was going to college part-time, and if things kept up at this rate, he was thinking of dropping out altogether. "There are no second chances," he told me.

I was genuinely excited for him. I knew that Shooting Star was something special, more than just a college-town band.