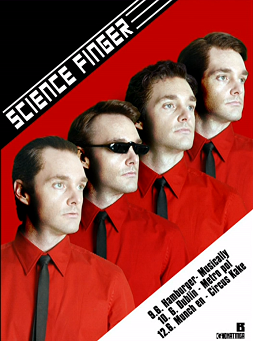 Band mentioned in "New York Underground with Trevor Dix," a sketch/short film from the 19 Oct. 2008 episode of Saturday Night Live. The video (which was directed by Noah Baumbach, surprisingly enough) parodies the breathless way some UK music writers talk about "underground" music.

Host Trevor (Bill Hader) mentions them as performers who have graced the stage at the Kennel Club in the Lower East Side of NYC, as well as:

Science Finger looks like a parody of real band Kraftwerk, and all four members being Will Forte.