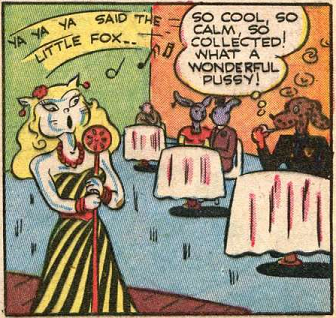 Um...
Feline singer and owner of the Katnip Kafe that appeared randomly as a back-up feature in random Fox Feature Syndicate comic books from 1944 to 1946. Ms. Katnip and her firefighter boyfriend George frequently butted heads with local small-time hoodlums Boss and Mugsy. At which point she would drink her secret family recipe "Katnip Fizz" which gave her super-fury and a extra clear and intelligent head. But somehow, not a costume.

An interesting but unsuccessful attempt to combine funny animal comics, superhero comics, and detective comics. Alas, the series is poorly drawn, and her character design is off-putting.