From Rocklopedia Fakebandica
(Redirected from Monkees)
Jump to: navigation, search 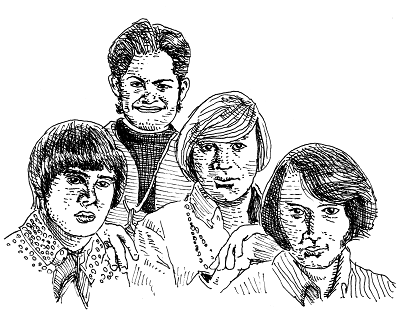 The Beatles of fake bands! No wait, that's The Rutles. Well, how about the Dave Clark Five of fake bands? Bert Schneider and Bob Rafelson created this band for the TV series, inspired by the Beatles' Hard Day's Night movie. One presumes the Beatles weren't available for a weekly series themselves. Peter Tork, Mike Nesmith, Micky Dolenz and Davy Jones formed the granddaddy of fake bands and one of the most successful, at least during the run of their 1966-1968 TV series. They gave the teenyboppers something to bob their heads and tap their toes to after the Beatles and other groups started dropping acid and making weirdo, undanceable concept albums.

To their credit, the band later struggled against the prefab nature of their image with their trippy 1968 film Head and 33 1/3 Revolutions Per Monkee TV special (14 Apr 1969). The song "Ditty Diego - War Chant" from Head parodies their famous theme song with lines like:

Hey, hey, we are The Monkees


You know we love to please
A manufactured image

While the fictional version of the band was a struggling, small-time Los Angeles band that never had any success, the Monkees became a real band in the real world, with several top 40 hits. They took control of their music by ousting producer Don Kirshner in 1967. They produced three albums as a cohesive unit, Headquarters (1967), Pisces, Aquarius, Capricorn & Jones Ltd. (1967) and The Birds, The Bees & the Monkees (1968). The other post-Kirshner albums were less "group oriented", but no more so than later Beatles albums. Eventually the show was cancelled, the hits stopped coming, Peter and then Mike left, and the two remaining Monkees gave up the ghost in 1970.

In 1986, MTV celebrated the Monkees' 20th anniversary by rerunning the TV series, causing the "Pre-Fab Four" to become popular all over again; they've toured and recorded sporadically ever since. Various versions of the band have released three reunion albums. Pool It! in 1987 featured three members (Mike sat this one out). On the 1996 album Justus, the four Monkees wrote and performed all the material with no outside help, for the first and only time (Davy died February 29, 2012). A second TV special on ABC, Hey, Hey, It's the Monkees (17 Feb 1997), had them still living in their Los Angeles beach house (probably because of rent control) and having had the same kind of wacky adventures for the past 30 years.

The album Good Times! commemorated the band's 50th anniversary in 2016, and was mostly Micky and Peter collaborating with big name fans like Weezer's Rivers Cuomo and XTC's Andy Partridge, who wrote songs for the project; Mike appeared on a few tracks, and Davy made a posthumous appearance on "Love to Love", which was recorded in 1967.

Has their formula ever been as successfully repeated? The Heights and The New Monkees sure tried, but none has really challenged the originals.