Difference between revisions of "Lenny and the Squigtones" 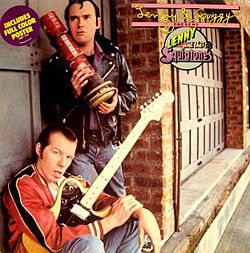 In the "The Second Almost Annual Shotz Talent Show" episode (31 Jan. 1978) they perform "Night after Night."

In the "The Third Annual Shotz Talent Show" episode (30 January 1979) they perform "Just a Couple of Lover Boys."

In the "The 4th Annual Shotz Talent Show" episode (6 Dec. 1979) they sing "If Only I'd Have Listened To Mama" and "Rock and Roll Is Here To Stay". featuring four other Squigtones. Strangely, only three Squigtones are credited. Don Poncher, Andy Haban, and W.G Snuffy Walden. Don Poncher is on drums, Andy Haban on bass, and there is another guitarist, and a keyboardist. Presumably W.G Snuffy Walden is on guitar - the guitarist doesn't look like Christopher Guest, and the keyboardist doesn't look like Murphy Dunne.

Lenny and Squiggy also covered Nat King Cole's song "Call the Police" in the episode "That's Entertainment" (9 March 1982), but it was seemingly a fantasy sequence, and none of the backing musicians appeared to be Squigtones, nor were they credited.

They released a 1979 live album on Casablanca, Lenny and Squiggy present Lenny and the Squigtones. recorded at The Roxy in Hollywood.

The "Squigtones," like David Lander and Michael McKean, are credited under character names, either for contractual reasons, or to lend credence to the fact that the fictional band exists. The album's performers are listed below, along with their credited character names and/or comments.

The above lineup appeared on American Bandstand (9 July 1979) performing two songs from their album "King of the Cars", and "Love is a Terrible Thing".

According to Michael McKean, they did about 30-odd gigs as Lenny & The Squigtones, and it appears that at some point during these 30-or-so gigs, Steve Benderoth and Christopher Guest stepped out and were replaced by Andy Haban and W.G. Snuffy Walden. Evidence for this comes from the fact that by December 1979, it was Poncher, Haban, and Walden who appear in Laverne and Shirley. There are references online to Andy Haban having been their bassist, and according to this Amazon review of one of W.G. Snuffy Walden's albums, it appears that Walden was touring with Lenny and the Squigtones until at least 1982 as their guitarist.

According to this Twitter post from Michael McKean, it appears that Haban and Walden also had character names. Andy Haban was known as "Dominic Balloon", and W.G. Snuffy Walden was simply "Snuffy".