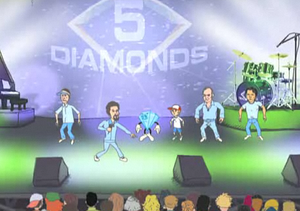 All-star boy band featured in "The Five Diamonds (a.k.a. A Hard Act to Follow)", the second episode of the short-lived animated comedy television series Stroker and Hoop. In the episode (first aired Sept. 5, 2005), the titular (hee hee hee) detectives' missing-child investigation brings them in contact with the band, which consisted of Neil Diamond, Mike Diamond, Lou Diamond Phillips, Dustin Diamond, and a giant talking diamond.

The band, which was designed to be the ultimate boy band, was searching for the mythical sixth diamond--ten-year old Danny Diamond-Schmiggler--and being opposed by a coalition of other monetary-themed celebs (David Copperfield, Goldie Hawn, Whoopie Goldberg, etc.). Yeah, even characters in the show mentioned that this plot didn't really make all that much sense. Anyhoo, it all comes out that the diamond is actually an evil cubic zirconium.