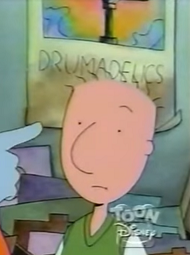 Band whose poster is glimpsed in a disreputable record store in the "Doug's Adventures On-Line" episode (June 5, 1999) of animated television series Doug.

Teen Doug and his friend Honker's records are stolen when a trade arranged with a stranger on the Internet goes bad, and they discover them for sale at Friendly Frankie's. Fortunately, they're pals with the mayor.