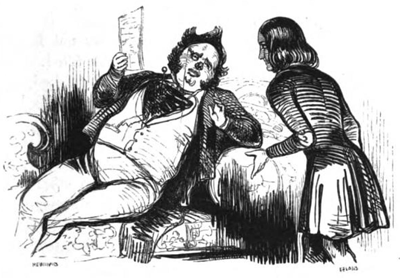 Linwood and Hodgson. Illustration by Henning.
Struggling young London composer and pianist from the short story "The Patron" from Bizarre Fables: a Series of Eccentric Historiettes by William Arthur Brown Lunn, 1843.

He is spurned by the wealthy patron and tasteless, nouveau-riche, musical know-nothing Dudley Hodgson.

Linwood's first composition is an overture based on Keats' poem "The Eve of St. Agnes." Later he writes a successful opera.

"Oh, play it on the piano by all means," said Mr. Hodgson. "Do you expect I'm to pore over your confounded scores? Here's a fine instrument, by Erard, that I touch sometimes when I'm in the humor. You play, Mr. Linwood — you play, and I'll listen."

Having thus uttered his dictum, the patron threw himself on the sofa, and Charles seated himself at the piano-forte.

He was a thorough master of the instrument, and played his composition admirably. It was very beautiful, and, for a first work, extraordinary. The dreamy, legendary, and exquisitely refined character of the poem, was preserved with the utmost truth in this overture. Every incident might be traced by its musical illustration, and the whole formed a perfect prelude, to the story. The poet and the musician seemed to have thought with one mind.