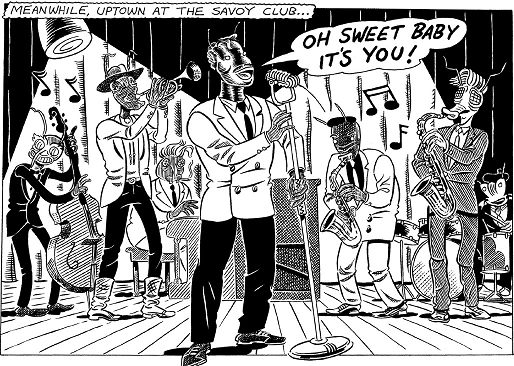 Jazz band of bug-headed people from the adult comic book BugHouse written and drawn by Steve Lafler. It started in 1993 in his Buzzard anthology series, then did 6 issues as a series and two graphic novels.

It's set in a 1950s "bug noir" New York. Published by Lafler's own Cat-Head Comics label.

Buggy is a handsome, successful, and well-regarded bandleader and singer. His band appears mostly in issue #1.

Unfortunately, Maxwell and Jones are addicted to the drug "bug juice," a powerful hallucinogen. Also, Wilson leaves the band to follow his girlfriend to Paris. Buggy fires Jones for getting so fried he can't play. This opens up the two spots for the series' protagonists, Jimmy Watts and Slim Watkins. They play for his band before leaving to start their own band, BugHouse.